The Chimps of Fauna Sanctuary

I recently read a moving book by Andrew Westoll called The Chimps of Fauna Sanctuary.  He’s a writer and primatologist who spent a summer at the sanctuary working with and meeting the chimps and human staff members. The book tells the story of thirteen chimpanzees who had spent years either in zoos or a medical research lab where they were deeply traumatized.  In the lab, they underwent multiple surgeries and other invasive, painful experiments and treatment. The belief was that this might help human health although that has turned out not to be the case. 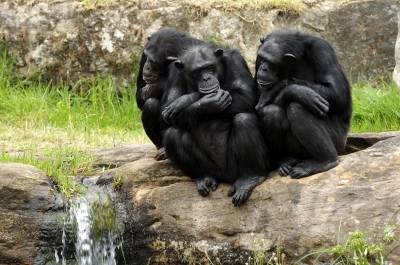 Nineteen chimps originally were rescued and sent to the Fauna Sanctuary in Canada, in the countryside near Montreal.  Fifteen were from a lab and four from zoos.  Some have since died, leaving the thirteen we encounter in this book.

At Fauna, Andrew Westoll saw the apes’ amazing ability to begin to trust humans despite what they had been through at our hands.  He wrote about the deep effects of their trauma.  Having worked as a therapist and counsellor myself in the past, I was repeatedly impressed by the similar ways in which chimps and humans react to trauma.  We share many symptoms, such as self harm and dissociation.

Chimpanzee Mother and Young, Image courtesy of Photokanok at FreeDigitalPhotos.net

This book also tells of the determination by the sanctuary’s founder, Gloria Grow, and the staff and volunteers, to give these apes a chance for some healing after extremely difficult lives.

The book is also the story of what we can learn about ourselves from knowing these sentient beings who, along with bonobos, are our closest relatives.  Each chimp is shown as an individual not only in Andrew’s words, but also in the wonderful photographic portraits Frank Noelker took of each of them.  Looking at these photos makes it less easy to dismiss or distance ourselves from them.

At the end of the book, Andrew Westoll gives information on how to help chimps.  In the U.S., you can support the passage of GAPA—the Great Ape Protection Act.  You can get information about the act at releasechimps.org and other sites.  You can also go to the author’s site: andrewwestoll.com and you can donate the Fauna Sanctuary at faunafoundation.org or faunasanctuary.org in the U.S.

I’ve been thinking again about my time in the Canadian Rockies this past September.  One of our favourite trails was the Wilcox Pass Trail off the Icefields Parkway, just south of the Columbia Icefield.  We only had time to walk the start of it—an hour and a half in total— because we had a long drive ahead of us.  Someday we’d love to return and hike the entire trail.

The path climbs pretty quickly, through forest, to a ridge where you can look down over the Parkway on one side and up across meadows to mountains on the other.  These are wonderful sweeping views of the land.

We saw several other people out enjoying the day.  One we spoke to was a man from Homer, Alaska who told us that this past winter had brought extremely heavy snow to his home.  What a contrast with Toronto which, last year, had only a dusting of snow and which, up to now, has had only a few melted inches.