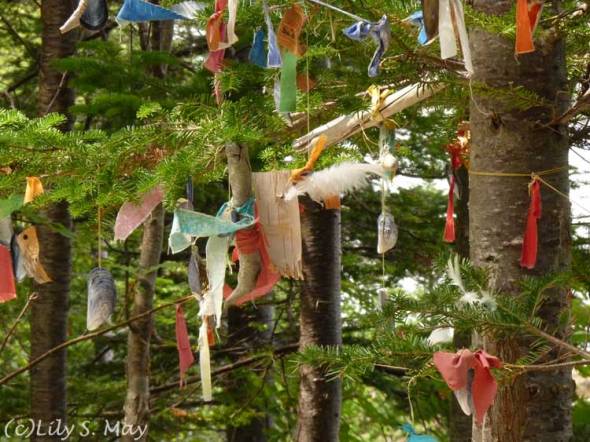 This photo is of a memorial to the Beothuk created in part by visitors to the historic site at Boyd’s Cove.  The Beothuk were an indigenous people who lived in what is now Newfoundland.  At around the time that European settlers began arriving, it’s estimated there were fewer than 1000 Beothuk alive.  They were hunters and fishers who went extinct by the early 1800s.  From what I can make out without doing an extensive study, there were combined factors leading to the disappearance of the Beothuk.  These include violent confrontations with European settlers, the Beothuk’s dislocation by the settlers which led to starvation and the illnesses transmitted by the settlers.

The Boyd’s Cove Beothuk Interpretive Centre is on the site of a precontact village from around 1650 – 1720.  After viewing the historical displays, we went to the memorial area, adding shells or other objects provided for visitors.  I thought about forgotten people on whose lives we walk, as it were, unknowing.