I’m taking a break from the cold and going to Larkwhistle Garden in my mind. Larkwhistle is a terrific garden on the Bruce Peninsula in Ontario that has been created and gardened by Patrick Lima and John Scanlan. For decades, they have opened the garden to visitors in the summer. But last year, they decided to end those public visiting days.

We have gone to this place of beauty for years since travelling to the peninsula and it remains with me in memories of flowers, birds and grace.  And with thanks to Patrick and John for what they have created and generously shared. 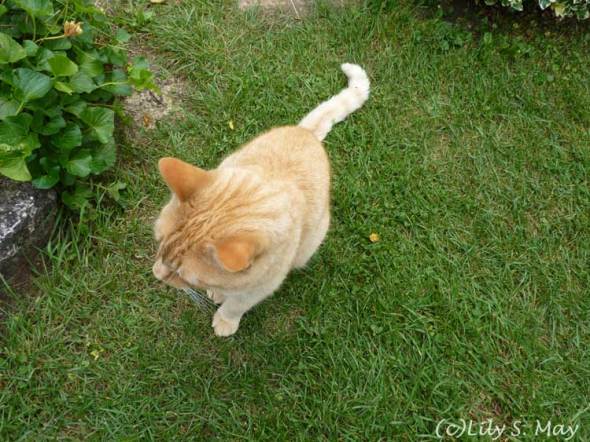 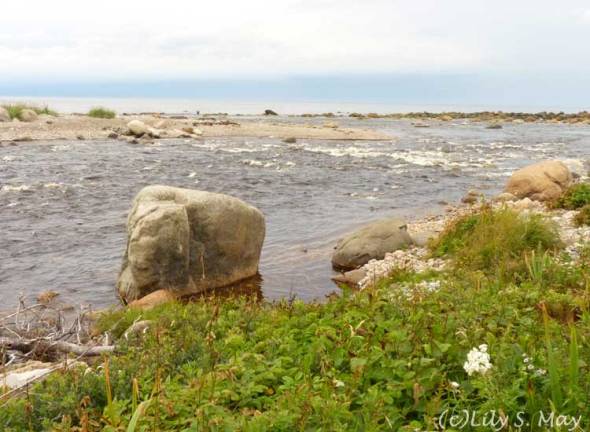 Our first attempt to go on the boat tour of the freshwater fiord in Gros Morne did not go as scheduled because of torrents of rain and lightning.  However, once the weather cleared, we went on a hike on the Coastal Trail near Green Point,  south of the fiord.  This cobbled beach trail is flat and runs right along the coast off the Gulf of St. Lawrence.  We saw marshy ponds and passed tuckamore forests.  Tuckamore is the Newfoundland word for stunted spruce and balsam fir trees that grow by the coast and in mountainous areas. 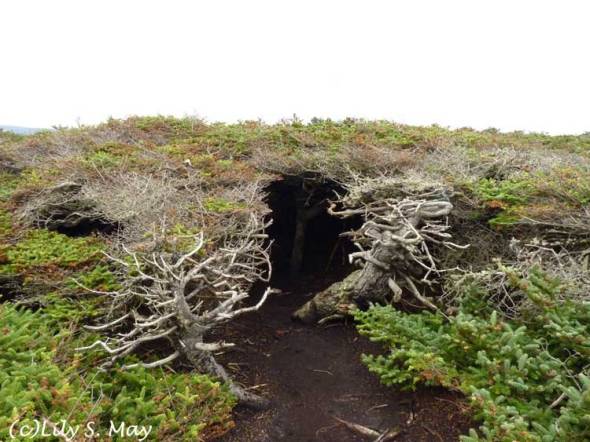 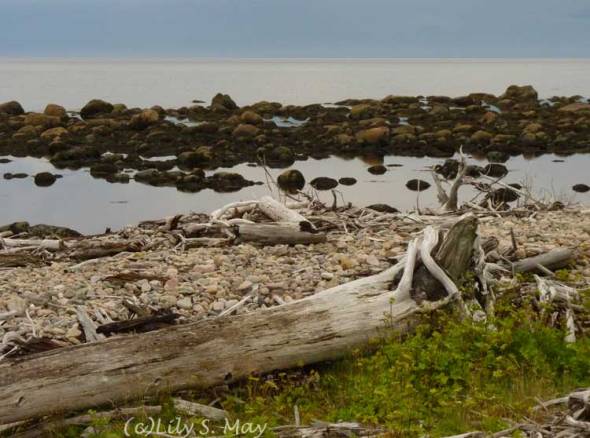 We did not take the full 6 km return hike, because we could see more thunderstorms brewing in the distance and travelling toward us. Since we were on totally open ground, we felt it was safest to turn around.  We were among several other hikers, all of us doing the return hike in record time.  This trail has stayed with me for its haunting atmosphere.  I found it of great beauty. 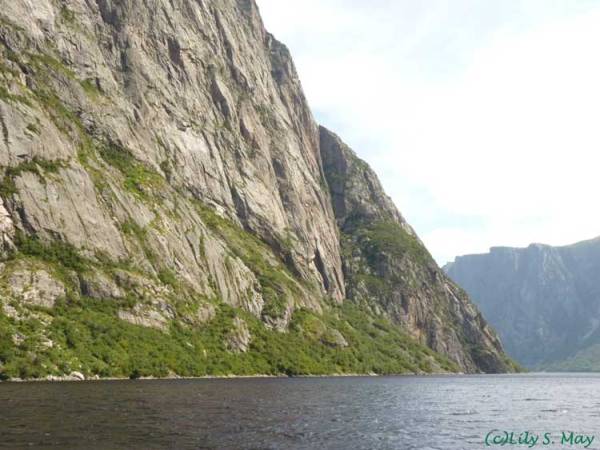 In August when we were in Newfoundland, we travelled to Gros Morne National Park in the western part of the province.  Gros Morne is a large, extremely beautiful park with a great variety of land and sea scapes. The park has been designated a world heritage site by UNESCO.

On the tour of the freshwater fjord, August 2013

We had heard that we must go see the freshwater fjord in Western Brook Pond while we were in Gros Morne. We took everyone’s advice and booked a two hour boat tour on the Pond.

Fjords are long, narrow inlets in the sea with high cliffs arising on each side. The steep cliffs were carved out of rock by glaciers from former ice ages. Western Brook Pond once was connected to the ocean but it was cut off from it after the glaciers melted and the land, having less weight upon it, rebounded.

On the boat tour of the freshwater fjord, August 2013

We had a sunny day with a bit of wind on the lake, enough to regularly splash those of us standing excitedly at the bow to get great views of the cliffs as we travelled into their midst.  Another experience of profound beauty in Newfoundland. 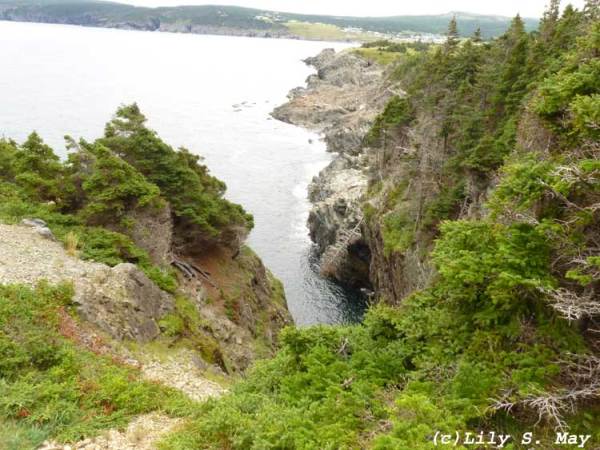 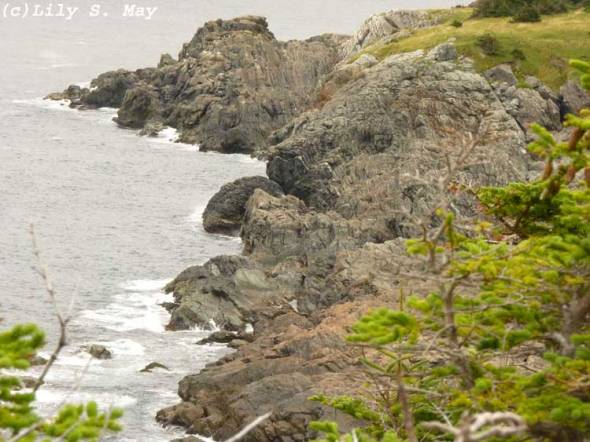 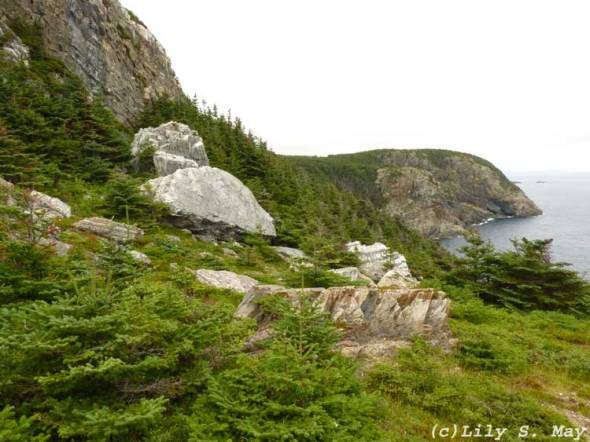 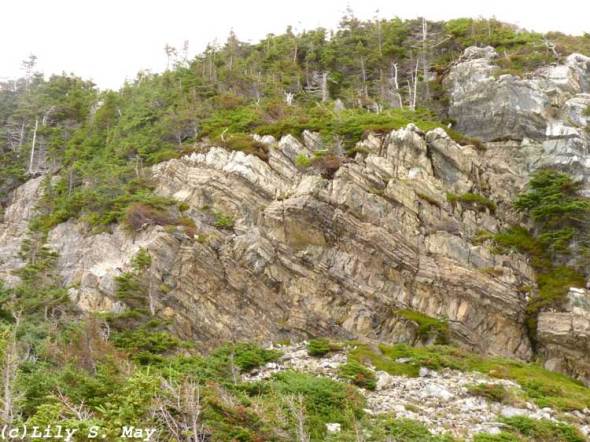 This past weekend we travelled to Haliburton county, to the northeast of Toronto.  We were eager to see the turning leaves which were intense even in the rain which accompanied us during most of the weekend.

This photo is of a beaver pond we saw on private land.  I am drawn to reflections in nature and loved the clear ones in this pond.  Because the scene was one of muted colours, I photographed it in black and white, which allowed me to focus on the design created by the mirror image. 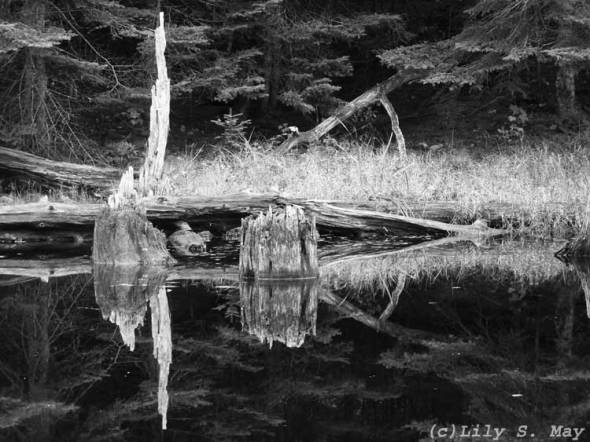