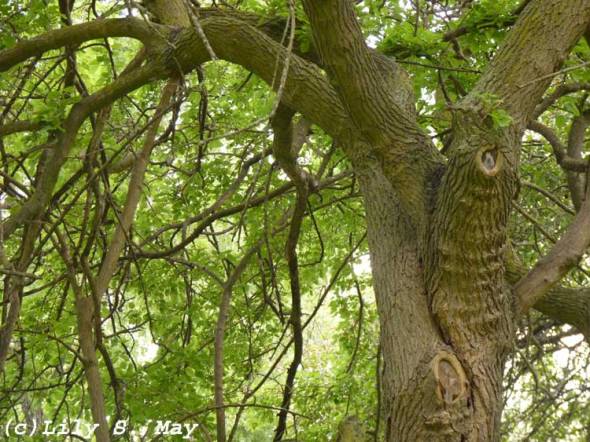 I went to Todmorden Mills in Toronto in the early evening yesterday.  It was cool and sunny and my preoccupations of the day left me as I got closer to the trees, freshly mown grass, birds and flowers in this bit of preserved nature. The irony of its being so close to the Don Valley Expressway is never far from consciousness. 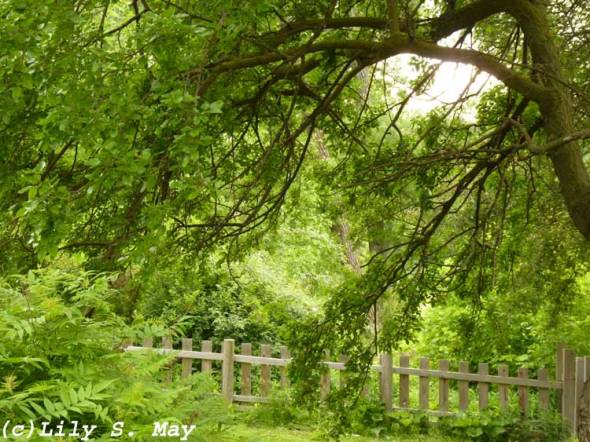 There’s a wildflower preserve at the site—a short trail through forest by ponds.  There I saw yellow and violet irises growing by the water, plus many wild phlox.  I came upon a man and his beloved dog having a walk as well as a jogger.  Many robins, sparrows, red winged blackbirds and cardinals were with me.

Yellow irises by the pond at Todmorden Mills, June 5, 2013 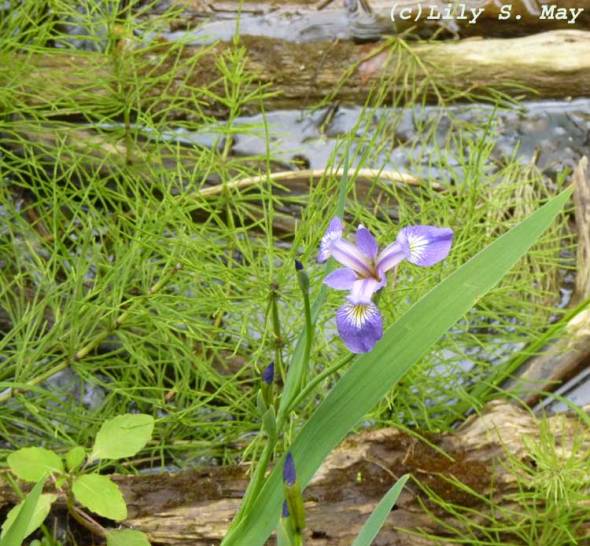 In that short hour my mood went from preoccupied and low to extremely peaceful.

Wild phlox in the wildflower preserve at Todmorden Mills, June 5, 2013 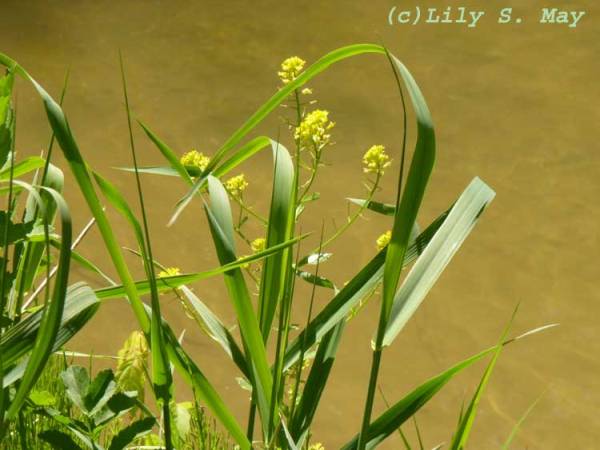 By a stream at Kortright Centre for Conservation, May 2013

Last weekend I went to Kortright Centre for Conservation for a walk in the woods.  The day was cool and sunny—perfect weather for hiking in comfort.  The woods were a vibrant green, a little deeper in hue than the first yellow green of spring. 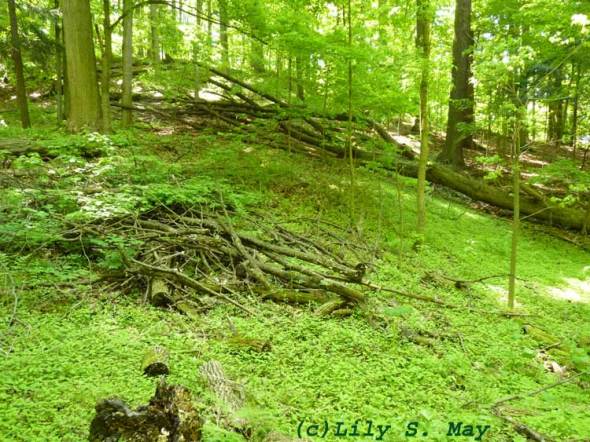 Ferns by the stream at Kortright Centre, May 2013

I photographed the woods and stream in colour and when I wanted to emphasize patterns, I moved to black and white.

In the woods at Kortright Centre, May 2013

As always, when I am at Kortright,  I felt a great sense of peacefulness to be in those welcoming woods, so close to Toronto and yet in a world so different. 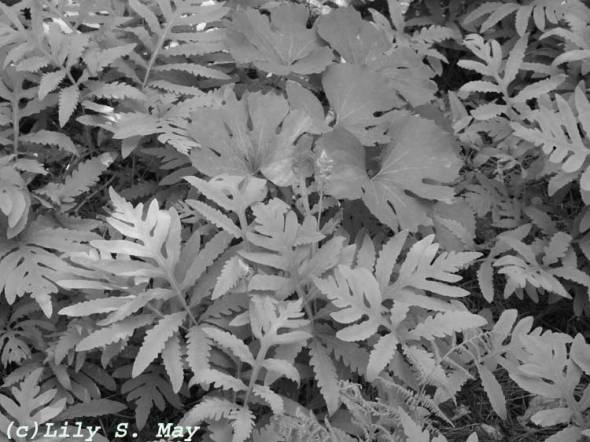 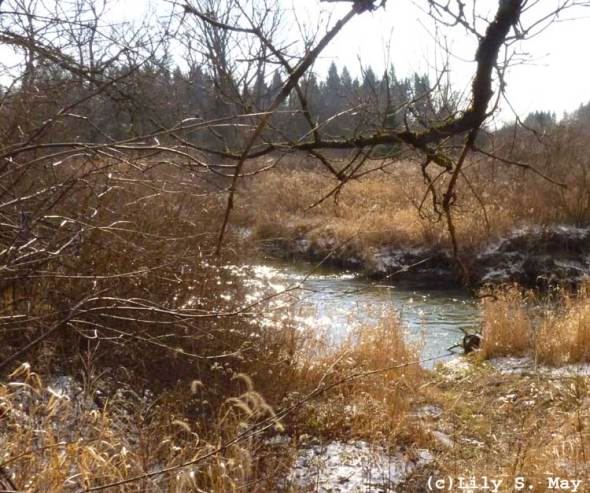 Earlier this week in Toronto, our mayor was ordered out of office by a judge who found him guilty of conflict of interest.  The mayor is going to appeal the decision, so we’ll see what next unfolds in this political drama.

Out on my rambles, I contemplate political turmoil and photograph the sky, the patterns of the bare branches, the late fall gardens and pigeons in flight.  Often my thoughts turn to the times we live in, where so much of the natural world is in peril, threatening all our health and lives.  Both the wonder and the terribleness of life are present every day.  As much as I can, I like to be open to ordinary beauty, while not denying that the peril exists.

Today, I’m including photos I’ve taken both in recent weeks and earlier this week.  And, after lunch, I’ll be out on a walk again. 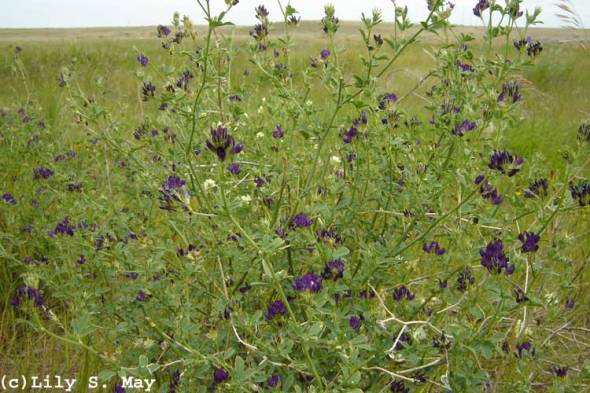 Wildflowers in Saskatchewan grasslands not within the national park, Aug. 2009

Recently I learned that our Canadian federal government has cut a prairie land protection program called the Community Pasture Program.  The government is turning care for grasslands outside the national park over to the provinces of Saskatchewan and Manitoba.  There are people concerned about Saskatchewan’s plans to sell what remains of this fragile landscape at market value rates.  They fear that much of what is left of the grasslands could be lost to development of different types and have started a petition to speak up for the continued protection of this land. 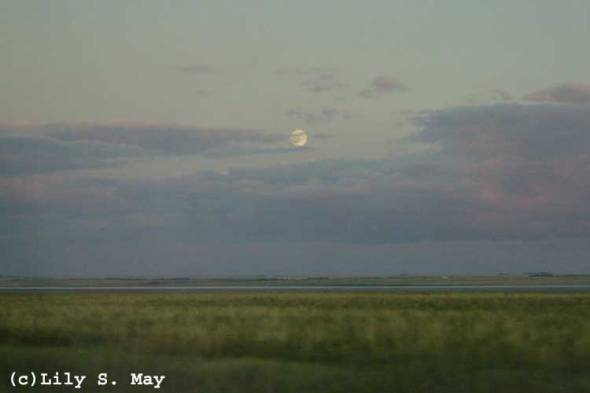 On the road at night under a full moon, Saskatchewan, Aug. 2008.

I do not live on the prairies but have travelled to Saskatchewan three times over the past few years.  There we drove through vast plains and grasslands and hiked in the Grasslands National Park.  What we experienced was a hauntingly beautiful land.  Contrary to what I’d heard for years, I did not find the plains of Saskatchewan boring.  While they are not dramatic like the Rockies, the grasslands have the deep, elemental feel of sky and land seen over huge distances.  We felt in the presence of something ancient.

In Grasslands National Park, where we hiked on rolling hills and up buttes, we saw stones patterned by lichen, wildflowers, mule deer, sky and land in full circles as far as the eye could see.  We felt a deep connection to this unadorned land and to life.

Generally, when looking at protecting parts of nature, people take different sides and fight with one another.  We are divided by politics and by economics among all the other things we humans cannot agree on.  However, I wonder whether we share something in common.  And that is, a love of some aspect of nature, be it land or water, light or clouds, trees, flowers, other animals or, in this case, grasslands.  This can only happen if we have had the chance to experience nature first hand in a way that matters to us and have not been deprived of the experience, say, in city neighbourhoods devoid of nature.

And although I write using the dividing words human and nature, I return to my first blog post where I thought we could use a new word to unite us—something like humanature.  Because, although nature is generally defined as the world other than human, we are animals and a part of nature.  If we learn to see ourselves and our place on earth in this way, new perspectives open from the question: why should I care if such and such a part of the natural world disappears, goes extinct or is polluted.  If we see ourselves as part of nature, the protection of other parts of the natural world is really a protection of ourselves.  Perhaps this seems far-fetched or poetic in the face of daily concerns with making a living and just getting by.  However, I don’t think so.  I believe that to save and restore what we call the natural world is actually a way of saving and revitalizing humanity. 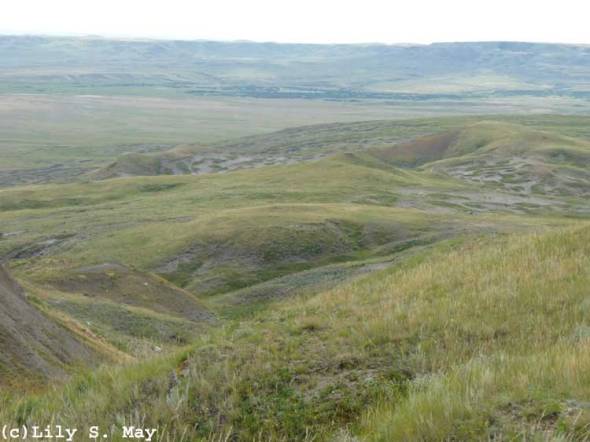 On our first full day in the Canadian Rockies in early September (after Labour Day), we went on the Johnston Canyon trail.  It was a cloudy, drizzly day and we joined many walkers on the cool, shaded trail.  This is one that many people would find quite do-able, particularly the lower trail.  There were elderly as well as young people, including some with babies in strollers.  The presence of other people did not diminish the beauty of the canyon which we found to be a great introduction to Banff National Park. 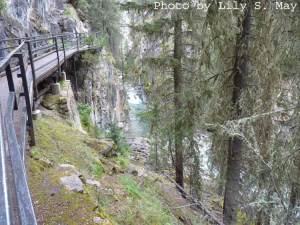 We eventually took the upper trail, which lead us to deep ochre coloured rocks.  There we spoke to a couple from Great Britain who were delighted, as we were, by the beauty we were in.  We did not continue on to the inkpots but will likely do so on a future visit.

The drizzle turned to rain as we retraced our steps, watching our footing on slippery rocks.  Despite the chill and dampness, I felt the trees, rocks and water giving me a feeling of well-being and calling to me to learn more about the history of this dramatic part of the country.

The Nature Principle by Richard Louv

At the Leslie Street Spit on the waterfront in Toronto, Canada, 2011

I’m reading a book that I find very meaningful.  It’s The Nature Principle by Richard Louv.  What I find important about Richard Louv’s book is that he’s looking at the great help humans receive from time spent in nature.  He has coined the phrase nature deficit disorder that many of us suffer from. He doesn’t deny the crisis we’re in. But he talks about worldwide actions by ordinary people that are bringing people and nature together for the benefit of humans and wildlife.  This doesn’t always mean going off into the wilds—although some people may have the means and desire to do this.  He talks about the ways we city dwellers can be in the natural world, for example: in gardens, parks, through learning about the wildlife that lives beside us in cities.  He points to the necessity of our connecting to nature to develop our love for the natural.  He imagines a future where, through our actions today, we live in nature in our cities, homes, work and play places.

The Limits of Language

Old tree roots by a hiking trail at Kortright Conservation Centre in southern Ontario, May 2010

I’ve started this blog to make our links to nature more conscious.  We arise from nature, after all.  However, many of us feel severed from nature as we increasingly live in cities and are focused on electronic devices. We often don’t see a place for ourselves in the world that we more readily see as natural—the world of trees, plants, other animals, mountain ranges, prairies, deserts, oceans….

The English language doesn’t help with this.  Perhaps there are languages in the world that do better at noting or suggesting our bond with nature.  In English, we separate the human and the natural as we assign different words to each.  I believe we need new words for what it’s imperative that we consider.  Perhaps something like humanature would be a start.  I don’t mean to suggest that a few new words would magically reunite us with who we are, but they might be pointers that help us.